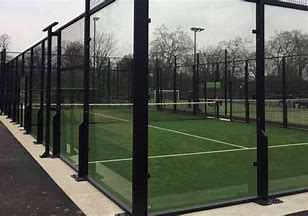 Our new court project is underway, with planning permission having been submitted for 2 new tennis courts and 2 padel courts.  We expect a decision around 20th January.  This is an exciting and ambitious project which would look to take advantage of a loan from the LTA but would require the generosity of club members again through the provision of soft loans, as of 4th December we are tantalisingly close to our target!

We know that the success of the club has created ongoing pressures around court capacity. Our plan is to build two new courts where the mini courts currently are, we have met with 3 contractors to discuss the positioning of the new courts and all agree this is the best location.  The mini courts had a 6% usage last year and we will be able to use the padel courts for mini tennis if need be. Therefore, the Committee feels that the loss of this resource would not be overly detrimental to the Club.

Padel is a fast growing sport in the UK and the LTA are fully behind promoting it, for those of you who are unaware of it, it’s a cross between tennis and squash, played across a net with glass sides that can be used to rebound off.  The padel courts will be located where the ‘scrubland’ is, alongside court 8 and we will install 2 courts to enable club sessions and tournaments.

We are looking for pledges of minimum £500 which can be shown to support our loan application.  The pledges are just that, and no money would be needed until the Spring, when we hope work will be able to begin.  Please email Natalie – administration@bsltc.co.uk if you would be willing to loan money for this project!

If we are only able to raise enough for one part of the project that is what we will start with but have high hopes that we can make the new dream a reality.

We use cookies to ensure that we give you the best experience on our website. If you continue to use this site we will assume that you are happy with it.Ok